A new report evaluating the water security of 165 countries has rated the supply of clean, fresh water to the societies and businesses of 10 nations at “extreme risk.”

I don’t have access to the full report so I have not read it yet. If you have a copy and can shareֲ it with me it would be great 🙂

According to the Water Security Risk Index, released by Maplecroft, a firm specialising in corporate risk intelligence, Somalia (1), Mauritania (2), Sudan (3), Niger (4), Iraq (5), Uzbekistan (6), Pakistan (7), Egypt (8), Turkmenistan (9) and Syria (10) are the countries with the least secure supplies of water. 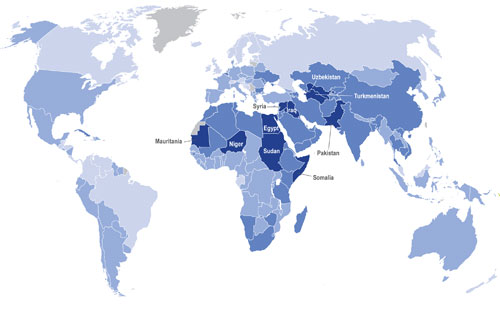 The index is one of over 100 created by Maplecroft to identify risks across supply chains, operations and investments of multinational companies and has been developed by measuring the four key areas surrounding the issue. These include: access to improved drinking water and sanitation; the availability of renewable water and the reliance on external supplies; the relationship between available water and supply demands; and the water dependency of each country’s economy.

The report states that countries in the extreme risk category, including the emerging economies of Pakistan, Egypt and Uzbekistan, are already experiencing internal and cross-border tensions due to limited water resources. Furthermore, as the global climate changes, water stress is predicted to become more acute in these regions and has the potential to threaten stability.

“The fact that Pakistan and Egypt are amongst the most vulnerable nations should send a signal to investors who will need to develop water conservation and security strategies and be mindful of their water use impacts on local communities,” said CEO of Maplecroft, Alyson Warhurst. “These countries also have some of the highest population growth rates in the world, especially around cities, so there is an urgent imperative for renewed policy action underlined by these results.”

Pakistan’s long-running dispute over Kashmir with India (13 and high risk) is in part fuelled by competition for critical water resources that are needed to maintain the growth of industry and investment for both countries. Egypt, which is dependent on water from the Blue Nile, is currently threatening legal action over the construction of the Gibe III dam in Ethiopia, which will further jeopardise its limited supplies; and in Uzbekistan, where an estimated 87% of the population has access to good quality drinking water, tensions are rising with Kyrgyzstan and Tajikistan due to hydro-electric projects on the rivers that flow into the country.

“Climate change and increasing demands from population growth will cause a worsening of water stress over the coming decades,” said Dr Anna Moss, environmental analyst at Maplecroft. “Conflict is likely to spread and intensify as a result of a lack of water security and for the countries that are heavily reliant upon external water supplies the issue of water may become critical. It is essential for business to monitor the risks in their supply chains and operations where they might face current and future exposures.”