In the past year I have seen a few press releases by WhiteWater Security (WWS) regarding their WaterWall product:

An important part of the WaterWall is something called the BlueBox which is an Event Detection System (EDS). In WWS’s web site there is no information of how this EDS works. Fortunately, I attended a one day conference about SCADA systems held by Lead Control. It turns out that Lead is the developer of the BlueBox module. From bit and pieces of information I’m able to give you the basic algorithm running it all. Please note that this is my understanding of the algorithm and may not truly reflect it in detail.

For the explanation I will be using data sets from the CANARY distribution which is the EPA’s event detection software. The data set includes a time series of six parameters: Cl2, PH, Temperature, Turbidity, TOC and Conductivity.

At each point in time we have a set of the six parameters. Each of these sets represents a point in a six dimensional space (like x, y and z in three dimensions). The Euclidean distance between each point to all of the others may be calculated.

Step 3 – Plot the frequency curve of the distances

Once we have the distances calculated we can easily plot its frequency curve as shown in the following figure: 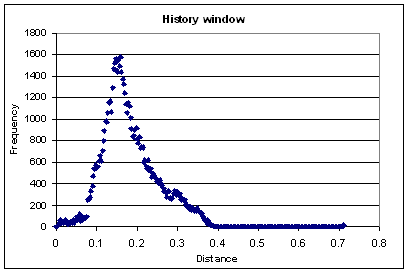 Step 4 – wait for the next reading

Now we are ready for the next data set to come from the SCADA system. Once a new set of the six parameters arrives we move the history window one time step ahead and calculate the distance of the new point to the points in the history window. And again we plot the distances frequencies on top of the previous curve: 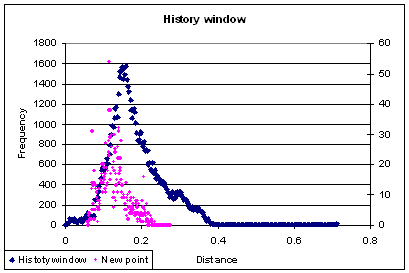 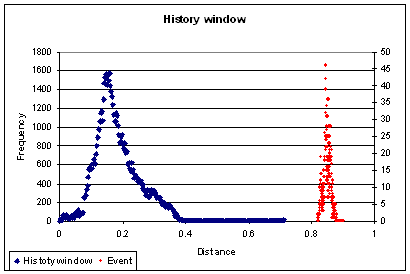 It is clear that the new point’s distance frequency is “far” from the normal distribution. Hence, an event.

The algorithm described here is very simple and that is its beauty. I have written its implementation in about an hour but in order to make it an online module a lot of work is needed. Once developed it may be able to do a number of things:

2 comments on “Bluebox Event Detection System – under the hood”