We need your help!!!

Kobus Van Zyl and Dominic Boccelli, members of the EPANET Steering Committee, just launched a crowd funding campaign for the Open Source EPANET project. The first project that is planned to be supported is for one of the main developers (Elad Salomons, yes, me) to attend and run a workshop at the first combined WDSA/CCWI conference from 23 and 25 July 2018 in Kingston, Ontario. 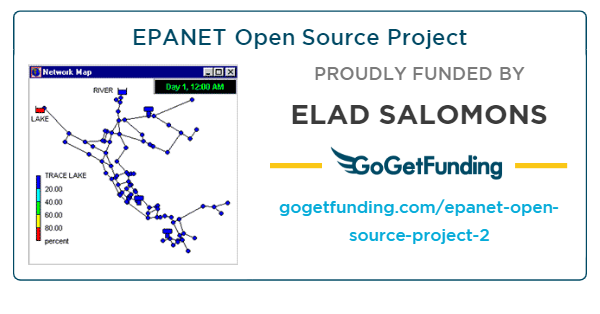 Here is the full text of the campaign:

EPANET started out as a public-domain hydraulic simulation package for water distribution networks, developed by Dr Lew Rossman at the USEPA. It is widely recognised that EPANET has played an invaluable role in supporting research and practice in the Water Distribution Systems Analysis (WDSA) field.In 2015 the WDSA Standing Committee of the American Society of Civil Engineers initiated an open source project for the continued development of EPANET after the retirement of Dr Rossman. For more information about the open source project, see the original project announcement, this editorial in the Journal of Water Resources Planning and Management and the development project itself on Github.The project has already resulted in the first ever open community release of EPANET (EPANET 2.1).

Developing a software package is not a simple task and the development has been done by a small group of dedicated volunteers. In many cases these volunteers are not academics or students, but work for themselves or small consulting companies and thus have to trade in chargeable time for their work on EPANET.

The aim of this funding campaign is to support the activities of the Open Source EPANET project. The immediate goal is to support key members of the development team to attend international conferences to interact with the WDSA community and run workshops to train community members to contribute to the project.

The first project that we hope to support is for one of the main developers (Elad Salomons) to attend and run a workshop at the first combined WDSA/CCWI conference from 23 and 25 July 2018 in Kingston, Ontario.

This is a call on everybody who uses EPANET, whether for modelling, research or teaching, to support the open source project by donating to this campaign. No amount is too small (or too big 🙂 and all funds received (except the GoGetFunding fee) will be used to support the open source EPANET project. Application of the funds will be done in consultation with the EPANET development team and all spending will be reported in full.

2 comments on “Crowd funding for the Open Source EPANET project”