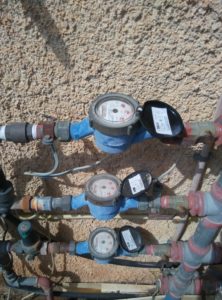 About ten years ago I had a discussion with the director of one of the largest water utilities in Israel regarding the option to deploy water quality sensors in the distribution network and to set up an event detection system. He said that he would probably wont go ahead with it voluntarily since if the system will alert and he wouldn’t act on it he would be held responsible. I was amazed by his answer especially since he was a civil servant and not the director of a private company (water utilities in Israel are owned by the municipalities). Recently a similar claim was used by another water utility in court.

The indisputable facts: on December 2nd 2012, while planting a tree in their backyard in a northern Israeli town, a family hit their private underground water pipe which started to leak unnoticed in large quantities. A few months earlier the water utility in that town installed a transmitting water meter on the property (what some people call a “smart meter”). 3 days after the leak started, the utility’s AMR (Automated Meter Reading) system alerted that there was a leak in that property. Following that alert the utility sent a letter(!) to the family notifying them about a possible leak. The letter was received on December 16th (two week after the leak started and 11 days after the leak was noticed by the utility). The leak was fixed on the following day. The utility sent the family a bill for 681.4 cubic meters in the sum of 10,040 NIS (about 2,700$).

The utility told the family that they may be entitled to a discount based on a special leaks tariff. The family refused and claimed that the water utility was negligible since it was supposed to alert them quicker by a phone call or a text message and went to court.

Well, one would think that at this point the water utility would accept the ruling but it didn’t. The utility appealed to the District Court mainly claiming that it is not reasonable to hold it, and other water utilities with an AMR system, to such norms. The District Court dismissed the claim and ruled that the choice to use new technologies which improved the service, even if not obligated to, comes with greater responsibility.

The water utility didn’t give up and requested permission from the Israeli Supreme Court for an appeal using the same arguments and claiming that this case affects the expected standards water utilities are held to. Also claiming again that if the ruling would not be reversed water utilities would be reluctant to use new technologies. The Supreme Court denied the request and explained that if a service provider uses new technologies, even if not obligated to, he is expected to use the information the unique technology provides in a reasonable manner. This was already ruled in other cases which involved new medical technologies. The court also rejected the claim that water utilities would not install such systems since the system already alerted about the possible leak so there is almost no extra cost to notify the customer (I would add that a phone call or a text message is cheaper than sending a snail mail).